Trouble rode through our town recently, on the back of a biting hard easterly. In its wake huge fence panels clung desperately to their posts; a neighbour’s rose arbour had repositioned itself in another part of the garden and one of my trees, in desperate need of beheading, flailed around helplessly.

“Mind the rhubarb”, I wailed later that day as a variety of steel-capped boots trampled across my vegetable patch and through the gap where my fence had once stood. The said fence had shattered and scattered itself in a most ungainly fashion across my neighbour’s finely trimmed lawn. Oops! 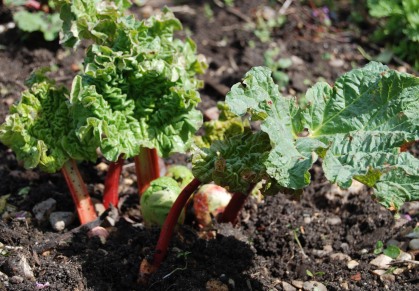 Several weeks earlier, the hint of rhubarb to come appeared next to the fence but our capricious weather made it think ahead and stay put for a while longer. Now I know there is a trend for forcing rhubarb – pink seems to be the new red – but I prefer to work with the weather and just bide my time. It’s always worth the wait. Eating in the proper season helps the taste buds to anticipate joys to come. When the first of those heavy, juicy red rhubarby stems are sliced, the senses are ravished with a sharp scent that screams Spring is here.

So the fence had gone awol and my rhubarb was standing there, young, fresh and very vulnerable. The haul wasn’t large but I reckoned it best to gather what I could since those big boots showed no signs of tiptoeing around things. Yes, the fence did need to be replaced, if only to keep marauding rabbits at bay. Also, I am very proud of my rhubarb patch. We have been together a long time now and where many other crops fail or succumb to pests, my rhubarb can be relied on year after year. All it asks in return is a good dollop of horse manure each season. So to the pot with my treasure.

I have a special pot. It is cast iron, blue and is not French. However, these cheaper imitations are as good as. (I have a whole set, so I know). This one came to me via a bit of bartering. It was a good deal because this particular pot never gets put away. It sits on top of the stove, heavy, majestic and always ready to do its duty. I had it in mind to cook the rhubarb and because the amount was small then incorporate it into a sort of flapjack/slice. A small nob of butter was melted in the bottom of the pot then the chopped rhubarb stems added (human beings should not eat the leaves if they wish to stay alive). With the rhubarb glistening in butter, I added soft, light brown sugar – just enough to take the cringing sharpness off but not too much else the delicate flavour of the rhubarb would be drowned in syrupy sweetness. Now rhubarb and ginger are a twosome. I went luxurious and rather than fresh, used a few nuggets from a jar that had been steeped in syrup. Tasting is permissible at this point, just before the lid goes on the pot. Rhubarb should sweat and so release its juice. As the moderate heat did its job, the scent of cooking rhubarb filled the kitchen and put me in the mood to tackle the next bit.

I made a very rich crumble mix of well over half fat to flour then added granulated sugar. As I was feeling healthy I added some oats too – this makes for a wonderful crunch quality. The rhubarb does not take long to cook so I removed it from the heat and allowed those luscious pink strands to cool.

I greased a square tin and pressed half the crumble mix into the bottom, pressing it out to the edges. The drained rhubarb was spread over this and the remaining crumble mix was sprinkled on top. I love the term ‘a brisk oven’ ..it conjures up a busy workspace filled with delicious aromas. It means a hot oven, so approximately 200C will do for about 40 mins. Once cooked, divide into slices, cool for about 15 minutes in the tin then finish cooling on a rack.

Then eat whilst watching the new fence being erected.

Oh glory be how happy I am to be a mum.....spelt with a u. Thank you so much my lovely. Xxx #mothersday #flowers #tulips #roses #cutflowers
Amazing trip to #unravel2018 yesterday. And ALL my fantastic goodies come from riverboat dwellers! I am so impressed and so delighted with it all. My new project (it's blue, of course) will always remind me of these incredibly creative people. Many thanks to @riverknitsuk and @ancaitinbeag and @mrsmcw #unravel2018 #unravelfestival #wool #knitting #knittersofinstagram #sheep
Oh I loved this #2018sve and look what I received...a Knitting Fairy, blessing me with haha....Patience! She also vanishes away mistakes and ambiguous patterns. Oh I am truly blessed. And she flew here on her fairy wings all the way from...well a shorter distance than I could ever have imagined. Huge thanks and hugs to the brilliant stitchmistress @mrsmcw. Just look at that mini basket of wool...and the heart shaped pins... and the little lavender sachets. Oh and those chocolates. Goodness, she does know me so well! #knitting #fairies #knittersofinstagram #wool
Hah! No more celery stumps on the compost heap from me. I probably won't be putting the celery growing industry out of business but I am so happy that this really works...just pop the stump in a little water and wait for it to sprout. Into a pot of compost next and I can foresee a small celery forest growing on the kitchen windowsill. #celery #recycling #foodforfree #compost #vegetablegrowing #vegetablegarden #cooking #kitchenwindowsill #sprouting
Just finished. Phew! It was a present so I felt obliged to read to the end. And I am glad I did. But I would suggest a notebook is necessary at the beginning to keep track of everyone. But now for a tandem read which I think might be less of a trial. Cogheart and Gingerbread... An interesting combo. #bookstoread #books #reading #booksofinstagram #youngadultfiction #brothersgrimm #fiction #novels
Another project bag in our Bad Fairy range. One recently flew across the Atlantic. Many thanks to @mspurpletop for your support and may you enjoy using your bag for many future projects. More available in our etsy shop. Link is in our profile #knittersofinstagram #knitting #projectbags #ourmakerlife #makerslife #knittingbags #illustration #woolprojects #wool #mixedmedia #makersofinstagram
Follow Up the A12 on WordPress.com